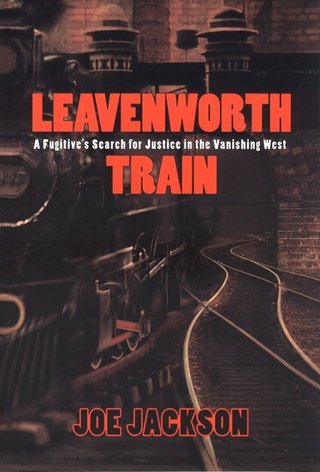 "Leavenworth was a sink of brutality. Inmates wore chains and other devices, such as the metal Oregon boot, which pulled bones from their sockets. Those who managed to escape almost invariably froze on the plains, starved, drowned, or else were cornered and shot through the lungs.... In Leavenworth Train, Joe Jackson dwells on one who got away.... [Frank] Grigware's daring escape and extraordinary life are gripping."

"An exciting, fast-paced account of crime and punishment at the close of the American frontier.... Jackson ably depicts a culture bent on fencing in men as well as rangeland."
--Kirkus Reviews

Pulitzer Prize nominee Joe Jackson follows America's longest-running fugitive from the waning days of the Old West to the middle of the Depression to the Vietnam era; from the depths of Leavenworth Penitentiary across the American plains and into the Canadian Rockies.

Frank Grigware, inspired by the vanishing legends of the American West, set out to find gold in the Idaho mountains, only to be taken in by a crew of train robbers. Convicted in 1909 of a crime he had no part in, he was sentenced to life in the first federal penitentiary. A year later he joined five convicts in hijacking a supply train and ramming it through the joint's west gate.

Grigware's flight from the Pinkertons and J. Edgar Hoover's FBI ends in Jaspar, Alberta, twenty-four years after his escape from Leavenworth, where it leads to an international incident. Jackson's masterful book reveals the different qualities of justice in two neighboring nations. Laying bare a war against crime, it ends with a surprising twist which shows that justice is capricious, the servant of time and place and ambition, yet tempered by the mercy of women and men.

The prison riding on the sea of lovegrass was built to transform men. Legions of prisoners swarmed about its unfinished base like ants; it rose from the prairie soil like a stone island. For its planners, it was the stuff of dreams. For the prisoners, it formed the core of nightmares.

Although its official designation was the United States Penitentiary at Leavenworth, Kansas, or USP Leavenworth, it went by many names, as if the world’s most famous prison could switch aliases as often and easily as the men locked up inside. While its architect proclaimed it as a twenty-two-acre “city within a city,” members of the growing criminal underworld called the “hard joint,” the roughest cooler of all. Inmates dubbed it the Big Top, a brutal kind of circus, distinguished from the Little Top, the smaller U.S. Military Prison two and a half miles away. They called it the Wall, a shared moniker for prisons; the Hot House, after its lack of ventilation; 1300 Metropolitan Avenue, for its postal address. An ex-congressman who served two years for conspiracy there called it “the house of whispering hate” where “whispered group jealousies . . . filled ever minute with peril.” A prisoner once described his first sight of Leavenworth as “a giant mausoleum adrift in a great sea of nothingness.”

Frank Grigware knew the feeling. Each night, as the barred doors slid shut on his and his neighbors’ small cages, he felt like nothing too. Maybe this was like death ? a yellowing necropolis filled with gray-clad bodies. Frank had no name in this correctional mausoleum, just a number signifying his date of internment and his slot in the records. He had no past before the day of what officials called his “delivery” into this alternate world. He had no future, for a future implies change. There was only an eternal present, every day basically the same as the one before. That monolithic present loomed before him the day the Leavenworth train took him through the gates. When they closed, he too felt buried.